The last meter reading of 2017 was on December 20th.  I was about 4 winter days of production short of breaking even. This was no surprise considering the extravagant use of the surplus power in November to heat the pool for over a week.  We had out-of-state guests and all they needed was about a 20-degree rise in the pool temperature.  The 130,000 BTU/Hr heat pump runs near 30 Amps continuous at 245 volts.  We were running it day and night to get up to the desired water temperatures.

So in the last month I needed 250kWh of power and paid about $45 for it.  The generating cost was only 16.50 and the rest was delivery and fees and taxes.

If you read earlier posts you know the fees and taxes decrease with the generating costs so that the bill can be as low as 9.36 per month when no electricity is used (net of in/out).
Posted by Unknown at 6:42 PM No comments:

We passed 152MWh production this week

I think Google has ruined the usability of Blogger since they took over Blogspot and renamed it.  It is very frustrating to try to log on, view, update, or post anything here.  They have hidden all the controls so well that I must come in the back door of editing a post to find where to post a new post.  I guess I'll try to save bookmarks so I can find this place again.  Weird.  Such a huge fail!

Here's some different photos I want on this blog since most sites like FaceBook select the first one they come to for a thumbnail. 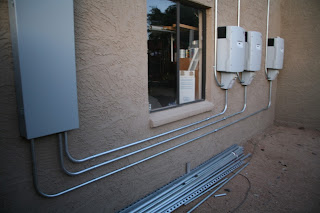 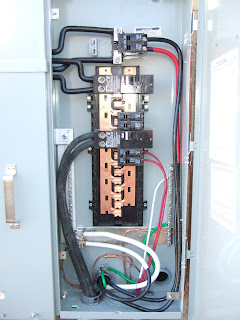 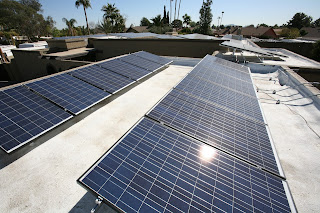 Posted by Unknown at 9:01 AM No comments:

The 2014 PV production year ended with the last meter reading on December 19.  On that date a surplus of  8611 kWh resulted in a credit of $249.29.  That's 0.028950 per kWh.  I would rather give it to someone but that's how it works.  APS sold most of that on peak power summer rates when I produced it.  After subtracting current charges of $9.94 the net credit was added to the prior credit balance of $178.09 for a total credit balance of $417.44.  I have since requested and received a check for $300 of this surplus on the account.  The idea of taking that amount was to leave enough ($117.44) to cover 12 months of bills if all were under ten dollars.  This is mostly the case.  But since the credit balance of kWh was converted to dollars on December 19, we've had cold and rainy weather.  On January 21, 2015 we had a new bill for $91.20 and that leaves only $26.72 as the credit balance.  So after another 3 billing cycles we will start paying the monthly fees again.  By then we will have surplus power on each bill, but APS only settles accounts once each year.  It would be nice if that date was after the cold weather, along about March would be nice.

Just a follow-up to the prior posting.  I never received anything back from the AZ Corporation Commission. Nothing concerning how little the surplus power is worth at the end of each year.  Nothing about my comment on the solar customer surcharges granted and how the power company requested huge amounts and got more than double their actual network maintenance costs from new solar accounts.
Posted by Unknown at 12:22 PM No comments:

This blog is not dead.  2013 was almost uneventful.  The broken solar panel was replaced under warranty by Centrosolar AG.  Their Scottsdale AZ office determined that it was a warranty issue.  The panel was in stock.  They sent out an electrical contractor to install it.  No charge.

AZ electric companies asked for 50 dollars per month from each residential solar installation, and settled for a fee based on size and which will average 5 dollars per month.  Mine would be 16 dollars, but I'm in the grandfathered class of systems installed prior to the new fee schedule.  After the news of this fee, which was touted to be a way of sharing the cost of the power grid infrastructure, APS was on camera and the newscaster asked what the average cost per month was for the grid infrastructure.  They said $2.30... so they asked for more than 20 times that, and settled for a little over double.  What a bunch of criminals.  The AZ Corporation Commission should review that footage and rescind their ruling.

At the end of the year, on the date of the December meter reading by APS, the surplus power was 10,356kWh.  For this I received a billing credit of $278.  That was quite insultingly low, considering they sold that power for at least 3000 dollars.  I have written to the AZ Corporation Commissioners. I await their response, but doubt anything will change.
Posted by Unknown at 10:30 AM No comments:

Well we're almost through with summer in Arizona again... officially I think we have 2 more weeks to go.  But rain and moderate temperatures have been with us for a week or more now.  Last month I did use more electricity than I produced, first time since my array went live on March 16, 2012.  The reason?  Clouds.  I was only short by 174 kWh.  That's less than two days of normal production.  But I had several days that produced half or less than the summer average.  All told it amounted to 2.35% of my banked surplus for 2013.  If you're reading this blog post first, please be advised that the really good stuff is near the earliest posts, and there's a lot of photos between January 2012 and the commissioning date -- March 16, 2012.  Before January of 2012 the blogs are mostly of my questions and speculations... being completely new to PV solar co-generation.
Posted by Unknown at 9:53 PM No comments:

1 percent failure rate (1 out of 99 panels)...  It still produces electricity with inner glass layer shattered.  The top glass layer is smooth and unbroken so I don't know when it will actually need to be replaced.  No water gets into the panel when I wash it.﻿ 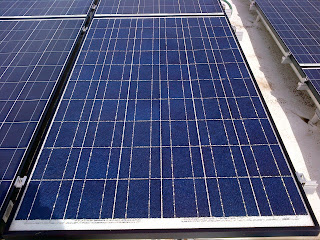 For the past month (March 2013) we've been producing about 130kWh per day.  I switched from time-of-day rates to flat so that there will not be a repeat of last summer, when night-time AC usage exceeded my off-peak co-generation surplus.  That meant that I had to pay roughly 60 dollars per month extra for those off-peak kWh even though I was making and banking more on-peak than I used.  With flat rates I'll always be able to use from my surplus.  The winter rates are used to settle up at the last meter reading of the year so that means there's almost no monetary difference between on-peak, off-peak, or flat rate surplus when it comes to getting paid.
Posted by Unknown at 7:26 PM No comments: